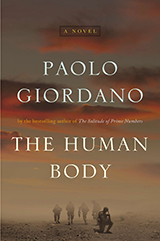 A platoon of young men commanded by Marshal Antonio René. The last to arrive, Corporal Roberto Ietri, is just twenty years old and feels totally inexperienced in everything. For him, as for many others, the mission in Afghanistan is the first major challenge of his life.
As they are preparing to leave, they still do not know that the place they are going to is one of the most dangerous in the whole area of the conflict: the forward operating base (FOB) Ice, in the Gulistan district, is “an exposed sandpit”. There is nothing there, only dust, and the sunlight is so strong that it causes conjunctivitis and at night you cannot turn on the lights without attracting mortar fire.
Waiting for them out there is medical officer Alessandro Egitto. He stayed on in Afghanistan, in that precarious “security bubble” out of choice, in order to escape a personal situation that he considered more dangerous than a war fought with guns.
Exhausted by the heat, the boredom and the fear of a threat that every day seems more unreal, the soldiers of the FOB try to reconstruct a life they are familiar with, deepening the friendships and conflicts between them, trying all kinds of distractions and indulging in dangerous comradely pranks. Only at night, lying on their camp beds, are they surprised by memories. In the absolute silence, the silence of civilization but also of nature, they can feel the beat of their own hearts, the hum of other internal organs – the ceaseless activity of the human body.
When the time comes to penetrate into enemy territory they will find that it is also the time when they have to deal with what they have left behind in Italy. On their return, they will irreversibly have crossed the line that separates youth from adulthood.
In this choral novel, that alternates light-heartedness and drama, Paolo Giordano precisely outlines the contours of the “new wars”. And, so doing, reveals the existence of other, more elusive, wars that are no less insidious: family and affective conflicts, as well as the bloody and interminable ones against ourselves.

What is a family?
Why do wars break out?
How does one become a soldier?